You are here: Home › Utilities › Power › Solar Energy now within your reach

If you’ve been hit by power outages due to typhoon and storms, most of the time you were unprepared in the area of backup power.   Two years ago we began seeing solar panels being sold in malls.  But they were expensive  and only those with a lot of disposable money could afford it.  But because of cheap China-made solar panels,  owning a solar generator  now isn’t prohibitive. In fact, we’re now seeing seeing solar panels being sold in Divisoria.  Solar Energy  for the home is now within your reach.  Solaric is one of the few companies in the Philippines that have come out with solar energy generators. That’s right. Instead of the usual diesel-engine run generators, you can now have your own solar generator and it won’t cost you that much.

Solaric has small solar energy generators that can power a small electric fan, several mobile devices, LED lights and more — all in a convenient aluminum package. Solaric installs the device and they can have your solar power generator running in several hours. 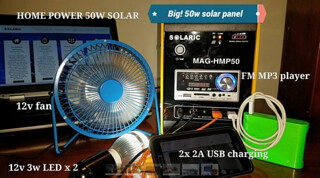 If you want to build one yourself, you can also do that.  If you’re on a tight budget, CD-R King actually sells solar panels, inverters and the equipment you’ll need to create a solar power generator.

Solar Power is now well within your reach.  It’s more environment friendly plus you’ll be getting power from an unlimited source.