If you want great home entertainment systems for your Smart home, it’s imperative that you get awesome TVs.  The Super UHDTVs are great (Samsung, Sony, and LG have some great UHDTVs) but if you want a theater experience, you won’t go wrong with an LED projector.   And If you’re looking for one, you’re in luck.

LG Electronics USA launched its 2015 lineup of LED projectors, designed with portability, versatility and connectivity in mind, making them perfect for home theater or on-the-go usage.

Leading its 2015 lineup is LG’s Portable LED Projector with Smart TV (Model PF1500), which promises to  deliver high-definition picture quality with 1920 x 1080 resolution and 1400 lumen brightness for better visibility, sharp contrast and rich blacks, even in environments with generous ambient light. A great option for a home theater, the LG PF1500 provides a cinematic viewing experience with up to 120-inch picture (which equals four 60-inch TVs). 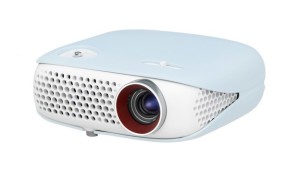 Key models joining the PF1500 in the lineup include three new “Minibeam” LED Projectors (Models PW800, PH300 and PV150G) that can project up to a 100-inch screen and are equipped with digital TV tuners, allowing users to receive over-the-air TV signals to enjoy real-time broadcast sports games and TV shows.

The PW800 and PV150G feature a wireless mirroring function, allowing users to beam their preferred content from a smartphone or tablet to the big screen, while the PH300 offers this capability via HDMI cable with MHL capability. For further versatility, all of these projectors can play movies, photos, music and even office documents directly from a portable USB drive and through a wired connection to a computer.

Each projector boasts a 30,000-hour lifespan, equivalent to 10 years of eight hours of daily use.

The LG LED Projectors are  available in the US but in a couple of months, it’ll be available here. For more information, please visit http://www.lg.com/us/projectors