People love using wireless devices. Aside from freeing them from wires and cables,  wireless devices allow people to move around and still get to surf the Web, listen to music and more.  According to IHS Technology, a global company that provides critical information and insight, this favorable trend coupled with changing consumer habits in media consumption have driven the demand for wireless connected audio devices; this includes wireless home audio devices used in homes as well. 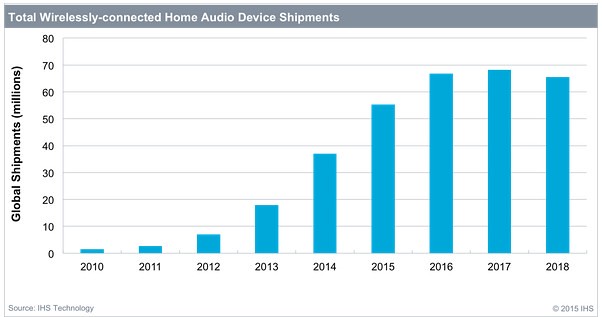 That’s a 4300% increase in less than a decade.   The same report said that the Wireless Audio market  is expected to grow at an already-high CAGR of 112 percent, between 2010 and 2018 and will likely grow faster.  That means a lot of people, including home owners, will purchase or own one or more wireless speakers.

Paul Erickson, senior analyst for IHS Technology, said that more people are  using tablets and smartphones to view video and listen to music and podcasts.  Coupled with the   convenience of using streaming services such as Spotify, Pandora and Deezer,  Erickson said that it is collectively driving  a behavioral shift in how people listen to music inside and outside their homes.

In the same report, Erickson said “Consumers are seeking ways to wirelessly play audio from their mobile devices on speakers in the room they’re in, in multiple rooms in a household, and on speakers carried with them while on the go. This geographically diverse need will drive strong global growth in Wi-Fi and Bluetooth connected speakers over the next few years.”

One of the things that’s impeding the adoption of wireless speakers for the home is the cost of owning one.  The unit that Smart Homes Now reviewed was priced close to P4,000; pricey for a such a small device.

The IHS Technology report acknowledges this as well but just like LCD and LED TVs, which cost an arm and leg six year ago, are now reasonably priced.  It’ll take some time before everyone can afford them but with   Samsung, LG, Sony , Bose and Denon and the rest of the audio manufacturers coming out with their own wireless audio products, their price points will drop soon.

Fixed audio systems will be here to stay and will still provide the best audio fidelity. Wireless speakers answer a different need but advances in audio technology may soon match a fixed audio system’s capability.

For more information on this IHS Technology report, click here.