You are here: Home › News › Meralco Electricity Bills Down for the 2nd Straight Month

It’s been one of the hottest summer seasons. We’re pretty sure that you’ve used your electric fans and air conditioning units to cool off. You’re probably dreading to look at your electricity bill this month. Worry not as Meralco reduced its overall rates last month. Yay! Check out their Press Release below.

After registering a reduction of PhP 0.70 per kilowatthour (kWh) in overall rates last month, the Manila Electric Company (Meralco) said that electricity rates will go down again this month by PhP 0.58 per kWh. This brings the total reduction to PhP 1.28 per kWh over the past two months. This month’s reduction marks the fourth time this year that rates have gone down.
For a typical household consuming 200 kWh, the overall electricity bill will go down by PhP 116 compared to last month. At PhP 9.40 per kWh, this month’s overall rate is lower by PhP 1.21 compared to June 2014’s PhP 10.61 per kWh.

Lower generation costs from IPPs and PSAs
The biggest reduction in the overall rates was due to the generation charge which decreased by PhP 0.36 per kWh from PhP 4.81 per kWh in May to PhP 4.45 per kWh this month. This is its lowest level since October 2010.

The reduction was mainly driven by lower charges from plants under the Independent Power Producers (IPPs) and Power Supply Agreements (PSAs) due to lower fuel costs and higher dispatch of the plants. After running for 19 days on alternate liquid fuel (while the Malampaya natural gas facility was on shutdown) during the April supply month, the natural gas power plants, namely, Ilijan, First Gas-Sta. Rita, and First Gas-San Lorenzo, operated on less expensive Malampaya natural gas this May.
IPPs and PSAs registered reductions of PhP 0.67 and PhP 0.59 per kWh, respectively. 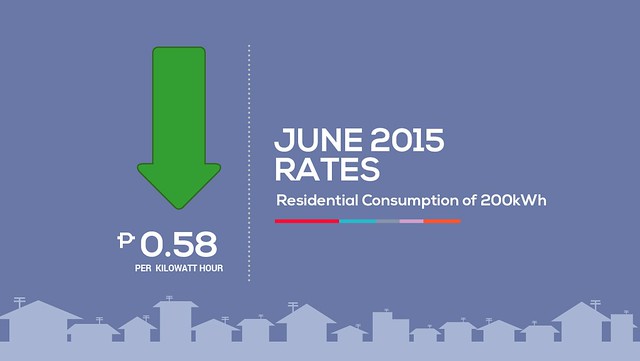 The reductions in IPP and PSA rates more than offset a PhP 2.85 per kWh increase in charges from the Wholesale Electricity Spot Market (WESM). It will be recalled that WESM exhibited noticeable price spikes particularly beginning the week of May 11, as a number of plants went on forced outages or reduced their output. The high WESM clearing prices, which at times approached PhP 30 per kWh, were sustained for the rest of the supply month. According to the Philippine Electricity Market Corp. (PEMC), the operator of the WESM, the Secondary Price Cap was not triggered last May.
The share of IPPs, PSAs, and WESM to Meralco’s total power requirements stood at 45, 48, and 7 percent, respectively.

Adjustments in other bill components

In addition to the generation charge, transmission charge also registered a reduction of PhP 0.09 per kWh. Taxes and other charges also went down by PhP 0.06 and PhP 0.07 per kWh, respectively. 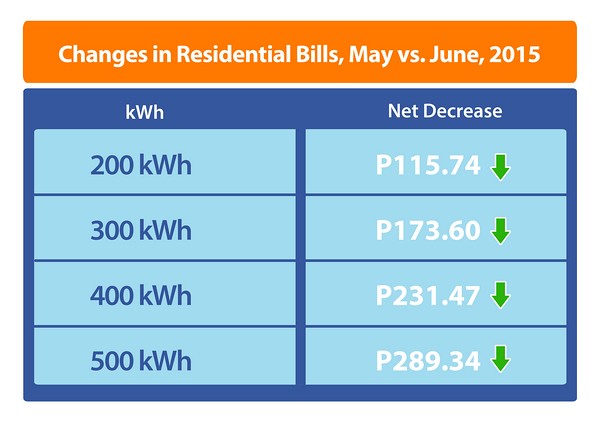 Meralco has consistently reiterated that it does not earn from the generation and transmission charges as these are pass-through costs. Payment for the generation charge goes to the power suppliers, while payment for the transmission charge goes to the National Grid Corporation of the Philippines (NGCP). Of the total bill, only the distribution charge accrues to Meralco.
Meralco’s distribution charge has not registered any adjustment or change and has remained at the same level for almost a year or since July 2014 when it reflected a lower rate compared to June of the same year.