If you’re serious about your virtual-reality adventures, why not get devices that let you feel it. We’re not talking about controllers that give force feedback and vibrations.  We’re talking about tactile feedback. And there is one now.  HaptX Inc. announced the release of HaptX Gloves DK2, their most advanced haptic feedback gloves. HaptX Gloves DK2 is the first gloves with true-contact haptics available commercially.

Unlike other haptic gloves, which are limited to vibration and force feedback, HaptX Gloves physically displace the user’s skin the way a real object would. They deliver unprecedented realism, with more than 130 points of tactile feedback per hand. DK2 is excellent for professionals in training and simulation, industrial design, and robotics.
According to the makers, Fortune 500 companies and governments worldwide already use HaptX Gloves to train their workforces. Automakers design and test new vehicles with them. Companies use them to control robots intuitively from a distance. 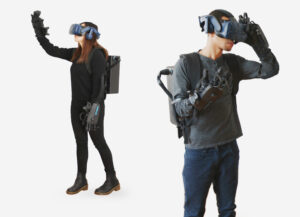 HaptX achieves true-contact haptics through its patented microfluidic technology, which replicates the feeling of touching real objects. Each HaptX Glove features over 130 discrete tactile feedback that physically displaces the user’s skin up to 2mm. HaptX Gloves also feature the industry’s most robust force feedback and the most accurate motion tracking.
You can learn more about HaptX Gloves DK2  at haptx.com.