We got some good news for home owners who are complaining about the slow Internet speeds and exorbitant prices.  It’s about to get better.

The entrance of Telstra, Australia’s biggest telecommunications  (telco) company in the Philippines has the big Philippine telcos worried.

They’re so spooked that they amped and dropped the prices of their high speed Internet plans.

According to Globe, the offering of a more aggressive home broadband portfolio also forms part of the telco’s efforts to uplift the state of internet services in the country by giving customers access to a faster internet experience with lower monthly service fees (MSF). 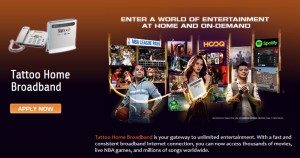 The new pricing scheme effectively puts the Philippines at par, if not better, against other countries such as USA, Thailand, and Indonesia in terms of affordability of broadband services. With its commitment to reach more customers, Globe is making its new Platinum Broadband Plans at less than half than its previous price offering.

To Smart Home owners, this is a positive development. At least now, we can say that our Internet speed is nearing the point where it’s almost just as good as the rest of the Western world.  Now all we have to worry about is the consistent service quality.