Ten years ago, solar powered homes were an uncommon sight in the Philippines. The cost of having your home powered by the sun was prohibitive and there weren’t that many providers. Today, it’s different. We’re seeing more and more Philippine homes powered by solar panels.  You can even buy and build your own solar power generator for less than P15,000.

Why are we excited about Solar Power? Well, for starters, it’s renewable.  Since it comes from the sun and it’s just there for most of the day, you can depend on it.   This is also clean energy which means,  it won’t generate the kind of carbon footprint like energy that comes from fossil fuels (i.e. like the power  I’m using  for my laptop to write this article).

If you’re looking to install solar power panels for your home,  we’ve compiled a list of  local providers. Find them below:

Solenergy Systems Inc., does large scale installations and according to their site, they are working on a distributed generation concept  for custom engineered solar power solutions.  That’s a pretty big undertaking and hopefully they succeed. Aside from doing industrial and commercial installations, they also do residential.

According to the site, they can  work with just about any existing roofing profile and material.  You’ll need to contact them via their web site or the contact numbers on the site. Click here for more information

MATEC considers itself as the first company in the Philippines to install photovoltaic solar systems on homes  and one of the  pioneers in the application of grid-tied photovoltaic systems. 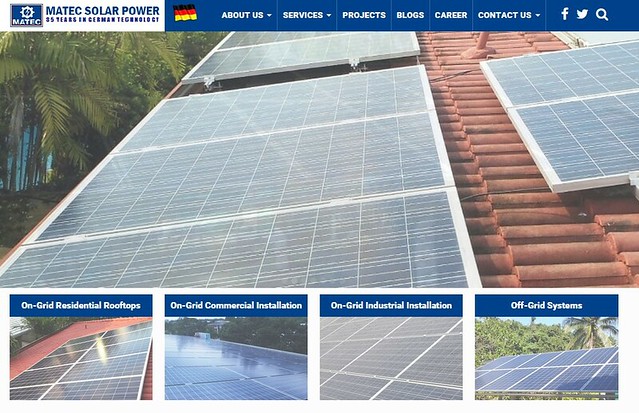 What are grid-tied photovolatic systems?  Instead of using batteries to store power from solar powers, the system uses the grid to store power. But they also have off-grid solar panel installations which use batteries.  Click on this link to contact them or find out more.

Equator Energy Corporation is another company into renewable energy generation  and they also have a slew of solar power systems and services.    Aside from wind and solar panel installations,  they can build you solar air conditioning systems, smartfabs solar kits and more.  What’s great about the site is that have a table of how much their solar system (microinverters) can save you each month. They also have SMARTFAB solar kits which  are small solar power generators. They also tell visitors how many devices you can power with their solar kits.  That’s pretty helpful if you ask us. Visit their site for more information. 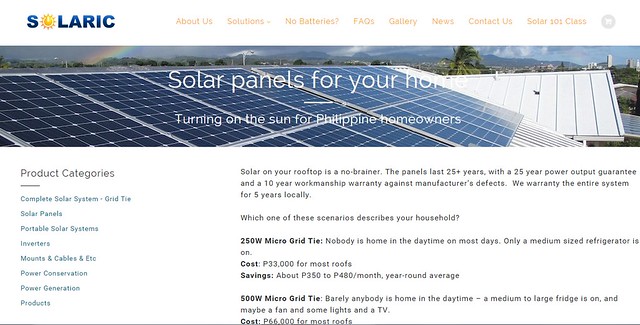 Solar System Philippines does home installations as well but they seem to be more helpful than the rest.  The site has this grid tied and off-grid estimator feature wherein you fill in the blanks on the power consumption, what devices you want powered up and more. 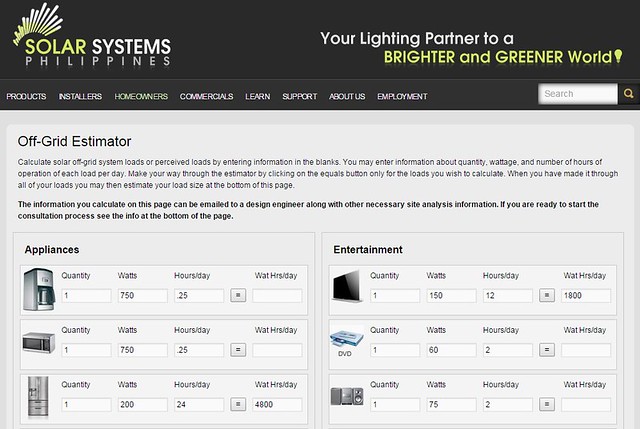 Once you’ve tallied up everything, it’ll tell how much you’re generating and what you’ll need to do next.  Aside from this, it has off-grid solar system kits, inverters, deep cycle batteries and more. Visit the site now for more information.

Next article, we’ll talk to these solar power generators as to the state of adoption of renewable energy for the home.