You are here: Home › News › Secure Homes with Strips Door and Window Sensors

I’ve installed a few security devices to secure my home. I had a remote sensor console back then and had to punch a number code to activate the door alarms at home.

Unfortunately, I never had proper alarms for my windows because I had sliding windows. I tried using those simple magnetic alarms with adhesive stick ons but it fell off after a few months.

And then I found out Strips, the “Invisible” Window and Door Sensor. It’s an Indiegogo project that’s looking for crowdfunding for commercial market release.

From the looks of it, Strips looks promising.  It’s not really invisible but it is one of the thinnest, wireless magnetic window and door sensor I’ve seen.

Check it out for yourself. 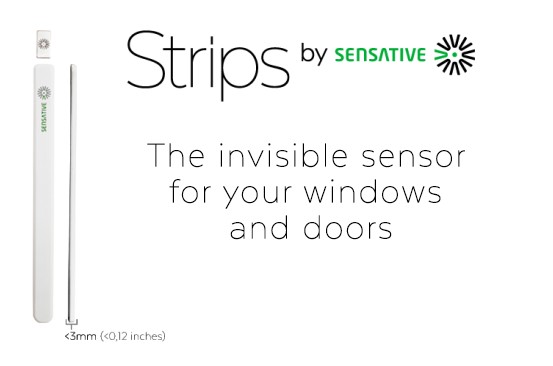 It’s less than 3 mm thick and according to the makers, it’ll last up to ten years.

It won’t blare out an annoying high-pitched sound.

But it will notify you through its smartphone app, if you’ve left the window open or if it’s been forced open. The Strips Smartphone app lets you check home entrances before you turn on the alarm.

What’s also great about Strips is that it uses Z-Wave Technology. That means that you can integrate this together with your home security hum that runs on Z-Wave technology. We’ve featured The Hive Home Security Solution and it runs on Z-Technology as well.  You’ll need a Z-Wave Gateway to include Strips into the smarthome network. This will also allow Strips to talk to your smartphone.

We’re excited about Strips and we’re hoping that it meets its funding goal. If it exceeds its funding goal, they will integrate a temperature sensor. This can be another security protocol together with the magnetic sensor to detect intrusions.

If someone manages to turn off the magnetic sensor, the temperature sensor could still alert users.

To find out more, go to Indiegogo or click here.